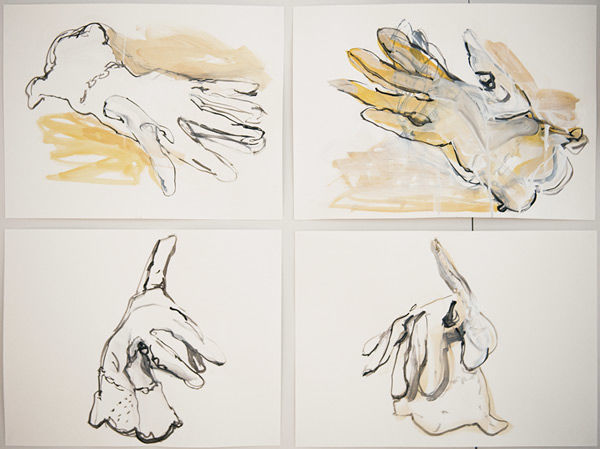 Mindy Lee’s title for her works ‘Birth and the Baby Game’ for the exhibition ‘Bodies Undone’, held in the Blyth Gallery, Imperial Arts College, London is possibly as loaded as the exhibition name itself. For most mothers who have experienced birth and babies, they are aware that ‘game’ is clearly ironic and a useful pun suggesting fun but challenge. Or perhaps it is the mind undone, for the game certainly begins there and the mind is after all connected to the body. If the mind or consciousness is removed, if the body is ‘undone’ from its frame, from its skin packaging, then how does it all hang? Birth and babies affect the body physically and mentally. There is ‘hardware’ and ‘software’ involved in this game. So the viewer must ask themselves: ‘What is the body when it is not entirely ours, connected with umbilical cords, almost parasitically; through DNA and genetic labyrinths? Here in this space of creation, two is one and one is two.

In Mindy Lee’s fabric paintings, the fabric represents this paradigm of two as one. It is the fabric of the body, of nerves and tissues and fibres. Thus the stitching is symbolically connecting these bodies and these parts, as the two fight to be one or indeed to be separate. The clothing from Lee’s actual pregnancy creates a nostalgic umbilical cord, a fabric or fabricated link.  In another way, the clothing, in the act of becoming an artwork, ‘preserves’ the momento, much like mothers who keep their baby’s tag or umbilical cord etc. The process of motherhood and domesticity becomes part of the creative process, which for parents of small children cannot be separated out. The profession cannot be separate from the maternal role: sometimes there remains a feeling of either beautiful symbiosis and at other times parasitism. But lets be honest, childbirth and procreation are in themselves the elemental and most original form of creation.

The other work that caught my attention in the show because of my own recent revival in my own drawing practice, was the charcoal hand gestures of Susan Sluglett. They are a visual exploration of the hand in process, as well as communication. Just as the hand draws lines and erases, so is there a sense of movement in the drawings through the erasing of sections and then drawing on top of this. The smudging becomes a shadow of time. It reminded me of the work of William Kentridge but with signs rather than narrative. The rough lines and working are reminiscent of the artistic process of testing and working with the materials. The way the hands are finished off is not entirely like that of traditional figure drawing studies. They are cut off by a line which makes it appear almost sculptural and connotes a whole new level to the concept of the ‘body undone’. These are not hands, they are gestures, signs, gloves, amputations even – a visual language in line.